The community-based cluster RCT in Wu et al. The QMNC framework Values component includes respect, communication and community knowledge and tailoring care to individual circumstances and needs. The Philosophy component describes an approach to care which optimises biological, psychological, social and cultural processes, and which avoids unnecessary interventions. Discussion of values and philosophy was missing in almost all of the reports of the control arms, and was very limited in the reports of the intervention arms.

While there was almost no discussion at all in the Flint et al. The intention was to empower women with a sense of being in control, so preparing them more effectively for labour.

Twelve of the studies referred to the need for those delivering care in the intervention arm to have adequate knowledge and skills; however only two referred to this with regard to the control arm. The management of skill mix was more adequately covered, at least with regard to the intervention arms. The purpose of this study was to help to identify the characteristics of those care models which may result in improved outcomes for mothers and infants. To do this we devised a novel approach to assessing studies using a recently developed evidence-based framework [ 5 ].

We acknowledge that our scoring system is a rather blunt instrument. We mitigated subjectivity by having paired members of the team review each paper independently.


An additional challenge was that we applied a recently developed conceptualisation of high quality maternity care to studies that date back some thirty years. Certain features of maternity care may not always have been recognised. Furthermore, an increased awareness over the years of complex interventions and of process evaluation have sometimes been reflected in more detailed reporting of recent trials. However, we feel it is essential to examine the evidence that does exist, and to establish a foundation for the measurement and reporting of specific aspects of care models in future studies.

Our intention is to identify what it is that leads to an outcome; this means understanding not just what is done and by whom, but what the underpinning rationale is for the intervention and control arms and how they are made to work in practice.

Thus the QMNC framework can be used to assess antenatal care provision, in particular whether a model of care has the characteristics that are likely to result in improved outcomes for mothers and infants. However, determining whether those outcomes are actually achieved in any given setting or model of care, and to which care characteristics they are attributable, will necessitate further study. The data extraction tool based on the QMNC framework was developed in order to identify those characteristics of maternal and newborn care which feature in reports of RCTs.

WHAT IS A MIDWIFE?

Nevertheless, this is the first study to attempt systematically to identify and describe the characteristics of care models that may be leading to improved outcomes. Although our literature search identified five associated systematic reviews we did not analyse these here as such reports are one step removed from analysing the component parts of an intervention.

Describing midwifery interventions and findings in terms of their underpinning values and philosophy, as indicated in the QMNC framework [ 5 ], can help to situate and define the factors that may be making the difference. This may be by unpacking the essential contribution that midwives can make and are making to the skilled care of women during pregnancy, childbirth and the postnatal period, and to improving outcomes for mothers and infants alike. Unpacking these attributes is an important step in improving the quality of maternity care for women globally. An example of this is the use of psychosocial support interventions to improve maternal mental health outcomes, as identified in systematic review evidence by Dennis and Dowswell [ 42 ], which could be potentially delivered by midwives given their intensive contact with women during pregnancy.

However, Alderdice et al. While reports of RCTs focus more on the characteristics and impact of the relevant experimental intervention, it is just as important to report on the control arm of a study. It is important, especially in the main paper from a study, to explain the essential aspects of control and intervention arms so that the fundamental differences between the intervention and comparator can be assessed. In many studies the control arm also included midwifery care, albeit within a model where major decisions about care were taken by doctors.


Since midwives provided aspects of care in both arms of many of these studies it is important to be clear about what it is that makes the difference. Details about who and what are insufficient; why and how are also required. Detailing the characteristics of care can help to identify either ineffective practices, or those that interfere unnecessarily with normal processes [ 5 ].

Our inclusion criteria meant that our search identified the continuity models included in Sandall et al. A limitation of our study in this respect was the exclusion of non-English language publications. The exceptions two Chinese studies and one from Mexico occurred in settings where there is not the same tradition of midwifery as in the countries in which the other studies took place, and it is difficult to make comparisons.

Nevertheless, the QMNC framework is underpinned by a global evidence base and the future work of the McTempo collaboration will go beyond midwife-led approaches to examine global antenatal care models. Funding of antenatal care varies across the world in both high-income and low-income countries; schemes may be funded publicly or privately, or by insurance, or by a combination of these.

Most studies did not specify care funding details, although Wu et al. In the Gu et al. While the characteristics of this component were included in relation to most of the intervention arms, information about the control arms was very limited except for discussion of dealing with clinical complications. However, even within the intervention arms it was surprising to find that several studies presented no discussion of health education or health promotion, or of assessment and screening during pregnancy.

It was perhaps particularly surprising that there was little detailed discussion of the promotion of normal processes and the prevention of complications. Promoting normal physiological processes might be thought to be a mechanism that underpins these interventions, and yet with few exceptions there was little discussion of what the models did, or intended to do in this regard. Discussion was most informative in relation to the presence of medical, obstetric or neonatal services — the area which, Renfrew et al.

We used the QMNC framework to assist with the evaluation of the antenatal care models by providing a structure against which to evaluate the interventions. Team midwifery, which involves a team of midwives providing care and taking shared responsibility for a group of women for antenatal, intrapartum and the postnatal period, was the predominant model offered in the included studies. The recent Better Births report [ 44 ] recommends a continuity of carer model based on small teams of 4—6 midwives, although some debate still exists about the merits and demerits of team midwifery [ 4 ].

There may also be a lack of clarity about how responsibility should be shared between the midwives within the teams [ 45 ].

Women receiving caseload midwifery were less likely to have interventions during labour, and there was no evidence of difference or detriment in maternal or neonatal outcomes. However, the distinction between team midwifery approaches and caseload approaches is not always well defined [ 25 ].

Although our review was able to distinguish which type of model was being provided in most cases, it is necessary for approaches to be sufficiently described in published papers, to inform assessments and comparisons of outcomes. With regard to caseload size, there was some consistency within the identified studies, ranging from 35 to 40 women per midwife at any one time. However, these figures do not include requirements to provide back-up for other midwives when needed.

Our study was restricted to antenatal models; it is possible that the same factors apply during labour and after the birth.

Where caseload figures are higher, there may be cause for concern about whether women in childbirth can be provided with the recommended level of care and support for the full period of their labour [ 46 , 47 ]. In many of the studies we examined both study arms involved care by midwives. Midwifery care was not therefore being compared with another completely different form of care. This means that any difference between the trial arms reported in the studies is likely to underestimate the impact of care by midwives, since both trial arms received versions of such care. Two studies in this review suggest that this may be possible without detriment to safety [ 32 , 41 ].

Unnecessary interference with normal physiological processes of childbirth has been shown to increase the likelihood of complications [ 49 ]. This much is inescapable, but we also make the point that we do not wish this terminology to reify the risk-based approach in future interventions or models. The importance of providing care that is tailored to individual needs is now well recognised. It has been found that abusive and disrespectful care is harmful but unfortunately widespread [ 51 , 52 ]. Rather, it runs wide and deep within the maternity services of many countries. Indeed, Warren et al.

Sacks and Kinney [ 56 ] argue that the scene is set for global strategies to be agreed to pursue this agenda. We note that this increased awareness of the need for care to be respectful and aimed at encouraging normal processes should encourage more explicit thinking about the rationale for interventions. In other words, care must be respectful and must also promote normal processes. 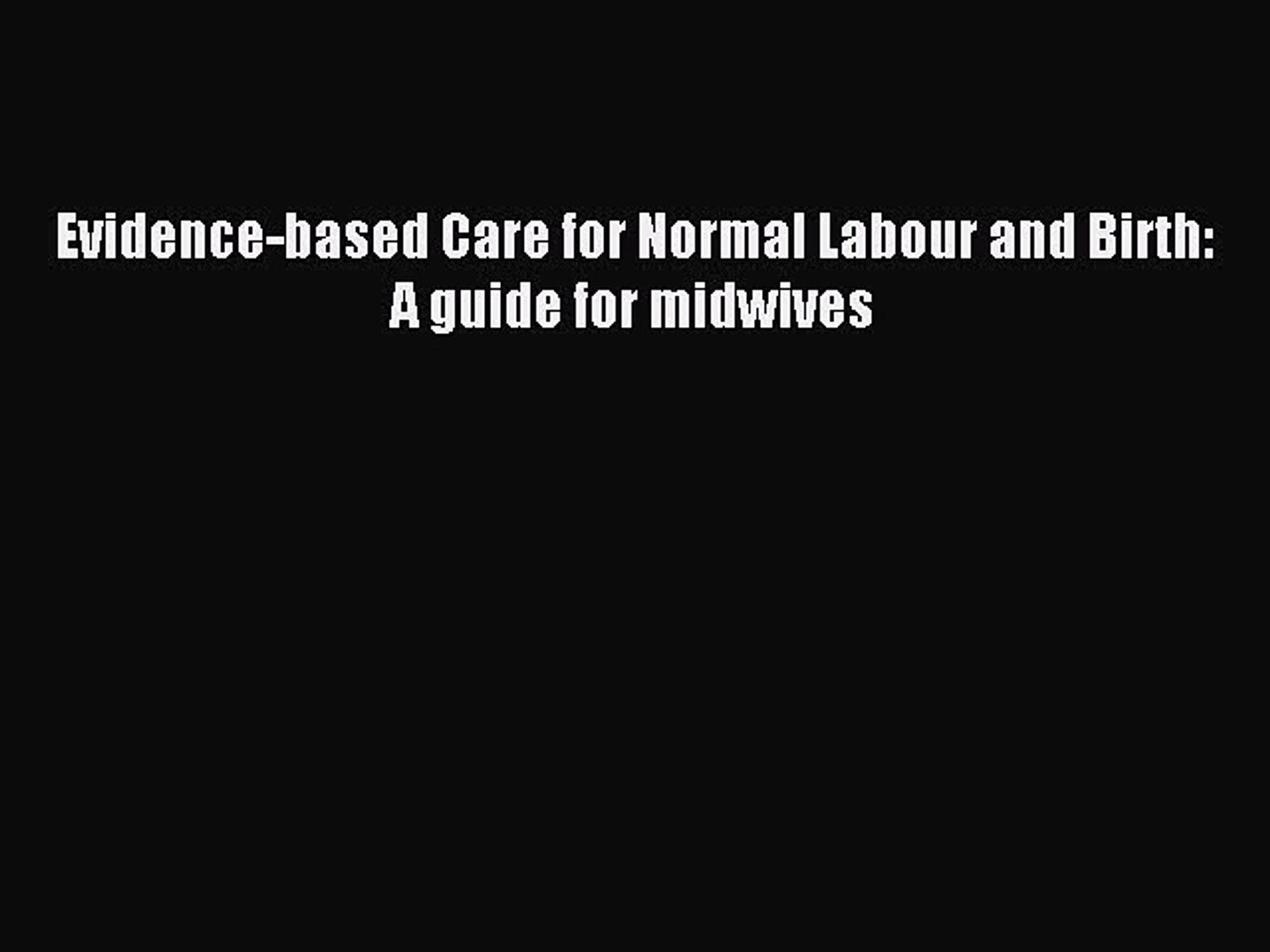 Related Evidence-Based Care for Normal Labour and Birth: A Guide for Midwives